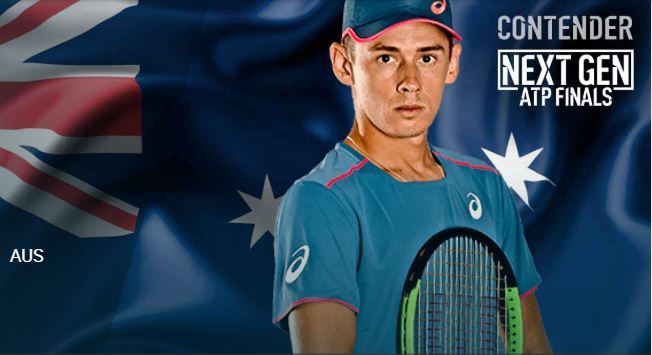 Disclaimer: This post is an RSS Feed from http://atpworldtour.com.

Continuing our Season In Review series, ATPWorldTour.com reflects on the storylines that shaped the ATP Challenger Tour in 2018…

Youth Movement In Focus: 29 #NextGenATP Winners
The 2018 season was unlike anything we’ve seen from the stars of tomorrow. The #NextGenATP contingent accounted for a staggering 29 titles from 20 different players, with Felix Auger-Aliassime, Ugo Humbert, Reilly Opelka, Michael Mmoh, Jaume Munar, Lloyd Harris and Hubert Hurkacz all lifting multiple trophies.

A total of eight teenagers emerged victorious, with Germany’s Rudolf Molleker becoming the youngest champion of the year, at 17 years and six months, on home soil in Heilbronn. Having concluded the 2017 season at No. 600 in the ATP Rankings, Molleker is now the youngest player in the Top 200 after finishing the year at No. 194.

Breaking Through With Top 100 Debuts
The ATP Rankings welcomed a new class of Top 100 debutants this year, with a total of 18 players breaking into the elite club. Sixteen of them won titles on the ATP Challenger Tour, kicking off their transitions to the next level.

Among all players to make their Top 100 debuts, Ugo Humbert (+290 spots), Christian Garin (+220), Alex de Minaur (+177) and Hubert Hurkacz (+150) enjoyed the biggest jumps. De Minaur’s rise was arguably the most impressive, having soared from outside the Top 200 to a career-high No. 31, behind a maiden title in Nottingham. Humbert, Hurkacz and Garin finished in the Top 10 among Challenger win-loss percentage leaders.

Meanwhile, Garin and Reilly Opelka provided the late-season drama, with both cracking the Top 100 behind consecutive titles. Garin finished his season on a 15-0 run with victories in Campinas, Santo Domingo and Lima, peaking at No. 85 in the ATP Rankings. Opelka capped his campaign on a 10-0 run with indoor crowns in Knoxville and Champaign, rising to a year-end No. 100.

From Dallas To London: Kei’s Comeback
It is quite improbable for a player to punch his ticket to the Nitto ATP Finals less than a year after sitting on the sidelines with a debilitating wrist injury. Considering that player opened his campaign on the ATP Challenger Tour, it makes the feat even more impressive. Kei Nishikori created quite the stir when he opened his season in Newport Beach and Dallas, giving fans the opportunity to see the Japanese star up close in an intimate setting.

In search of confidence and match play, Nishikori would kick off his run to the year-end Top 10 with a title at the RBC Tennis Championships of Dallas. Getting match experience and rediscovering his rhythm was essential for Nishikori in that moment, as he dropped just one set en route to lifting the trophy.

“There were two reasons behind playing the two Challenger events at the start of the year,” Nishikori reflected. “It was to build my confidence and also identify how well my injury had recovered. I needed to play tournaments in my comeback from injury. When I look back to January and February, it’s amazing that I was able to return to the Top 10.”

In the past 20 years, only three players have qualified for the Nitto ATP Finals after winning an ATP Challenger Tour title during the season. Ivan Ljubicic did it in 2005, Robin Soderling in 2009 and this year it was Nishikori’s turn to pull off the feat.

Challenger Stars Translate Success To ATP World Tour
The ATP Challenger Tour is the launching pad for the stars of tomorrow of the ATP World Tour. Regardless of age, players are plotting their ascent at the Challenger level and the 2018 season saw a bevy of success stories.

A 19-year-old Alex de Minaur reached a trio of finals before streaking to the Citi Open title match and finishing runner-up at the Next Gen ATP Finals. A 26-year-old Marco Cecchinato won his fifth Challenger title in Santiago, Chile, before claiming his maiden ATP World Tour titles in Budapest and Umag and blasting to the semi-finals at Roland Garros. And a 29-year-old John Millman advanced to his first ATP World Tour final in Budapest and first Grand Slam quarter-final at the US Open after competing for a decade on the Challenger circuit.

De Minaur, Cecchinato and Millman are just a few of the fascinating stories of the season. Eight players won titles on both the ATP World Tour and ATP Challenger Tour this year, including Pablo Andujar, who went back-to-back at the Alicante Challenger and Grand Prix Hassan II in Marrakech. And 22-year-old Matteo Berrettini and 23-year-old Yoshihito Nishioka blasted to their maiden tour-level titles after enjoying breakout Challenger campaigns.

Felix Makes More History
Felix Auger-Aliassime continued his record-breaking charge up the ATP Rankings in 2018. A year ago, he became the eighth-youngest player to win a Challenger title when he prevailed in Lyon, France. And this year, the Canadian became the youngest ever to successfully defend a title with yet another victory in Lyon.

In October, Auger-Aliassime added a fourth trophy to his career haul, joining elite company as just the sixth player aged 18 & under to claim as many titles. Richard Gasquet, Tomas Berdych, Hyeon Chung, Mario Ancic and Guillermo Coria are the only others. Up to a career-high No. 108 last month, he is poised for a Top 100 breakthrough in 2019.

Ivo Blasts Into The Record Books
While the #NextGenATP contingent stole the majority of the headlines, the old guard made quite the statement as well. Ivo Karlovic claimed a historic title on the indoor hard courts of Calgary, Canada, becoming the oldest ATP Challenger Tour champion ever. Seeking a late-career resurgence, the former World No. 14 and ‘ace king’ etched his name in the record books at the age of 39 years and seven months. Dick Norman previously held the honour for nearly a decade, having prevailed in Mexico City in 2009 at the age of 38 years and one month.

Just two weeks prior, Karlovic and David Ferrer created another slice of history with their final match-up in Monterrey, Mexico. At 76 years and one month, it was the oldest combined final on the Challenger circuit.

Demon, Thommo Lead Aussie Assault
The Aussies dominated on the ATP Challenger Tour throughout the 2018 season, with 12 different players accounting for a total of 17 titles.

There were plenty of feel-good comeback stories to go around as well. Jason Kubler (shoulder, knee), Thanasi Kokkinakis (knee, groin), John Millman (shoulder, groin), James Duckworth (foot, shoulder, elbow) and Matthew Ebden (knee) all led the resurgence. Kubler made his Top 100 debut in August after sitting outside the Top 900 one year prior, completing a magical rise up the ATP Rankings. Kokkinakis won his first title in three years, while Duckworth prevailed in Cary after undergoing five surgeries since early 2017.

Opelka and Mmoh were joined by fellow #NextGenATP stars Taylor Fritz, Tommy Paul and Ulises Blanch in lifting trophies. Paul and Blanch were the lone lucky loser winners of the year on the ATP Challenger Tour. Meanwhile, 22-year-old Christopher Eubanks and 23-year-old Mackenzie McDonald were victorious, as were Bjorn Fratangelo, Denis Kudla and Dennis Novikov.

Bolivian Blur: Dellien Puts Bolivia On The Map
Hugo Dellien hopes that his achievements in 2018 will inspire his native Bolivia and signal a shift in its sporting culture. In April, Dellien became the first from his country to win a Challenger title since 1983, when he triumphed in Sarasota. He would add a second crown two weeks later in Savannah and eventually a third in Vicenza, Italy. And in July, he joined Mario Martinez as the only Bolivians to crack the Top 100 of the ATP Rankings. Exactly 34 years after Martinez first put the nation on the tennis map, Dellien is following in his countryman’s footsteps.

All Eyes On South America
We’ve revisited the rise of Chile’s Christian Garin, who marched to the Top 100 behind three straight titles to conclude the season. And we’ve looked back on the ascent of Bolivia’s Hugo Dellien, who also lifted a trio of trophies en route to the Top 100. But Garin and Dellien weren’t the only players from South American making great strides on the ATP Challenger Tour.

In Argentina, Guido Andreozzi and Juan Ignacio Londero added their names to the list of emerging stars. Andreozzi won a tour-leading four titles this year, all on clay, while boasting a 38-15 record. He rose to a career-high No. 78 in the ATP Rankings last month. Londero, meanwhile, is breaking through at the age of 25. He posted a 40-win season (40-17) with titles in Mexico City and Marburg, Germany.

Pablo Andujar: Comeback Story Of The Year
In 2018, there was arguably no storyline more captivating than that of the 32-year-old Andujar. The Spanish veteran was sitting at No. 1,701 in the ATP Rankings one year ago and he would take the ATP Challenger Tour by storm behind three titles and a 21-8 record. After undergoing three elbow surgeries, Andujar never imagined that such a successful comeback was possible. He would rise 1,619 spots to a year-end World No. 82, also lifting an ATP World Tour trophy in Marrakech.

Global Game
With singles titlists from 38 different countries, including a first winner from Bolivia in nearly 35 years (Hugo Dellien), players from all corners of the globe tasted success on the ATP Challenger Tour.

The 2018 season also featured a total of 159 tournaments in 40 countries and territories, including the return of Challenger tennis to Tunisia. After a four-year absence, the African nation hosted the Tunis Open. With the goal of bringing exposure to the game in various locales throughout the world, the circuit continues to expand and grow.

New Challenger Era Announced
In July, the ATP announced that the ATP Challenger Tour will undergo wholesale changes from 2019 that will further professionalise the sport, unlock significant investment and growth in prize money at the lower levels of men’s professional tennis, and lead to a greatly enhanced player pathway.

Some notable changes include the singles main draw sizes increasing from 32 to 48 players, hotel accommodations provided to all main draw players, wholesale prize money increases, as well as increased on-site serviced offered. From 2020, ATP Ranking points will begin at the ATP Challenger Tour only.

Trio Of Tournaments Take Top Honours
In February, the ATP announced the 2017 ATP Challenger Tournaments of the Year, with players voting German events in Braunschweig and Heilbronn, as well as Vancouver, Canada, as the top events.

Braunschweig’s 24-year-old Sparkassen Open has won the award every year since 2014 and has long been a player favourite. The Neckarcup, staged in Heilbronn, Germany, for the last four years, and Vancouver’s Odlum Brown VanOpen, relaunched in 2017, have also been rewarded with the player vote after ambitious improvements each year.

Mexico Surging Into Spotlight
With a total of seven tournaments, Mexico is steadily expanding its footprint on the ATP Challenger Tour. New events in Mexico City and Puerto Vallarta sparkled in their debuts and the country’s commitment to growing the game at the Challenger level has not gone unnoticed by the players.

Organised by the same group that runs the popular ATP World Tour 500 event in Acapulco and sharing the same tournament director, Raul Zurutuza, the CDMX Open in Mexico City received rave reviews. It is held at the Centro Deportivo Chapultepec, the oldest tennis facility in the country.